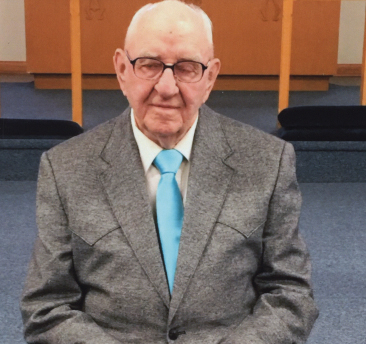 Funeral services for Victor Schlomer, 93, of Glenham, will be held at 10 a.m. on Thursday, June 17, 2021, at Zion Lutheran Church in Mobridge.
Burial will be in Glenham Cemetery under the direction of Kesling Funeral Home of Mobridge.
A prayer service will be held on Wednesday, June 16, at 7 p.m. at St. Jacobi Lutheran Church in Glenham.
Victor passed away on Friday, May 28, 2021, in Gillette, Wyoming.
Victor Delbert Schlomer was born on Nov. 5, 1927, to John and Hannah (Lemke) Schlomer on the family farm south of Glenham. He was baptized and confirmed at St. Jacobi Lutheran Church. Vic was a lifelong member of St. Jacobi, which his father, uncle and others started and built. He graduated from Glenham High School in 1946.
Vic was drafted into the Army during the Korean Conflict and was inducted into the Army on Jan. 17, 1951. He served two years in Germany and France and was discharged on Dec. 31, 1952. On New Year’s Day 1953, he arrived home on the train and was met at the Glenham depot by his parents and Dorothy Haar.
On Easter Sunday, April 5, 1953, Victor and Dorothy Haar were united in marriage at St. Paul Lutheran Church in Roscoe. They spent their life living in Glenham. Vic spent the last two-and-one-half years of his life at Prairie Sunset Assisted Living in Mobridge.
Victor worked for his brother, Charlie, at the Glenham Hardware Store. He was also a backhoe operator. He put in the Glenham water and sewer system, plus many water lines for ranchers and farmers in the area. He also dug many graves in the area and helped move many cemeteries along the Missouri River and in Kansas and Indiana. Later in life, he worked for WEB water.
He was a lifelong member of St. Jacobi Church Council, served as the mayor of Glenham, on the Glenham School Board, and was a member of the Mobridge Rodeo Association.
His main hobbies were his horses and going to rodeos. He participated in many rodeos, doing breakaway roping and team roping.
The highlight of his life was being the Grand Marshal of the Mobridge Fourth of July Parade and Sitting Bull Stampede in 2018.
His other hobbies were hunting, bowling, trap shooting, playing softball (in his younger days), playing cards with family members and traveling to see his children. He was also a dedicated Twins and Vikings fan.
He was called to his heavenly home on May 28, 2021, at the age of 93.
Grateful for sharing his life are his four daughters, Vicky (Richard) Allerdings of Gillette, Wyoming, Jeri (James) Richards of Aberdeen, Tina Pearce of Orlando, Florida, and Juli (Ray) Bailey of Alamogordo, New Mexico; nine grandchildren, nine great-grandchildren and four step great-grandchildren; one sister, Lorraine Fowler; and many nieces and nephews.
Vic was preceded in death parents; his wife, Dorothy in 2011; seven brothers, Charlie, Cody, Walter, Henry, Richard, Alvin and Gerhard; four sisters, Dorothy, Ruth, Gertrude and Leona; on sister in infancy, Elma Carrie; one son-in-law; and one grandson.
Memorials may be directed towards St. Jacobi Church in Glenham or Great Plains Lutheran High School in Watertown.